Jafar Al-Sadiq is a Descendant of Abu Bakr

In the name of Allah the Most Gracious and Most Merciful…

The following article will provide conclusive proof that Jafar Al-Sadiq is a descendant of Abu Bakr, from Sunni and Shia sources. The article will also include a refutation to a desperate Shia attempt to weaken one of these narrations in which Jafar speaks highly of his great-grandfather.

The article will be split into the following sections:

Jafar Al-Sadiq is a descendent of Abu Bakr (Sunni Sources)

Jafar Al-Sadiq is a descendent of Abu Bakr (Shia Sources)

In an authentic narration in Musnad Musadad, Jafar praises Abu Bakr then states: “He gave birth to me twice.” (See ItHaaf Al-Maharah #8852) 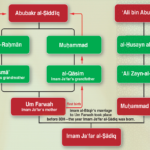 This statement might seem strange, but those that are familiar with the geneology of Jafar Al-Sadiq will not be surprised. We have included an image of the nasab of Jafar for the sake of clarity.

Ayatollah Qazwini’s Attempt to Respond to the Narration 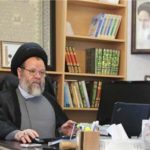 Below, we find a response to the previous narration from the valiasr-aj website, the website is under the supervision of Ayatollah Mohammad Hussaini Qazwini. 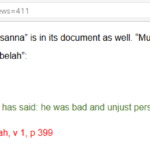 As we can see, the refutation includes a statement from Imam Ahmad in which he strongly denounces Mu’ath bin Al-Muthanna, a narrator of the hadith. However, upon returning to the original source that is quoted, we found a completely different statement. 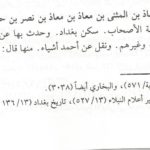 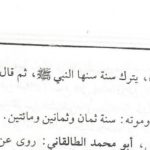 In conclusion, it is clear to the objective observer that Jafar Al-Sadiq has twice as much of Abu Bakr’s blood running through his veins than the blood of Ali bin Abi Talib.

Now, we are fully aware that being a descendant of someone does not mean that one is upon his views, however, we simply wanted to bring this information to the attention of our Shia readers, since most of them have been oblivious of this fact that was hidden away by their scholars. This reality is especially embarrassing for those that claim that Abu Bakr is from a impure lineage that actively and openly participated in lewd acts.

In one of our future projects – Allah willing – , we will be compiling authentic narrations from Jafar Al-Sadiq in which he praises Abu Bakr, so stay tuned.

The Shia like to bring up Muhammad ibn Abu Bakr and claim the man was one of them, although in reality he wasn’t, he never killed `Uthman (ra), in fact when he met `Uthman (ra) and talked to him, he [read more]

Response to: Abubakr and Umar CURSED by the Ahl al-Bayt (as) [Part 2]

The following is a response to Guided’s “Abubakr and Umar CURSED by the Ahl al-Bayt (as) [Part 2]”. The article can be found on the Wilayat website. Guided argues: “This article is related to the crisis between Sayyidah Fatima (as) [read more]

Response to: The Oppression of Sayeda Fatima (s.a) Part VII-I

The following is a response to RevisitingtheSalaf.org’s article “The Oppression of Sayeda Fatima (s.a) Part VII-I.” The article was published on the 19th of June, 2014, and can be found (here.) It has taken seven irrelevant articles to finally get [read more]