Across the centuries, Sunni-Shia polemics have developed and expanded as a result of a variety of sociopolitical factors that have influenced the discourse and its subsequent framework. Unfortunately, the change has not always been to the better. Religious zeal has often blinded many, driving them away from the realm of integrity, objectivity and intellectual honesty. The alternative to that is a framework where desperate and dishonest ‘cheap shots’ are constantly made to prove a point. In this article, I will examine some of the common behavior exhibited by many Shi’i polemicists today, which detracts from the quality of the discourse.

Here are a few common fallacies a Sunni will often encounter when dealing with arguments presented by Shi’i polemicists:

I. The Appeal to Secondary and Tertiary Sources

This is a common pitfall that can be observed in many works authored in this field. Essentially, Shi’ite polemicists will often bombard the reader with a list of secondary and tertiary sources when attempting to establish the authenticity of a specific report in Sunni literature. However, many bypass the fact that secondary and tertiary sources are merely later works that quote earlier sources. Thus, the reader is tricked into believing that this report is independently ‘corroborated’ in tens of sources, while it may only be mentioned in a few primary sources. Thus, such works cannot be cited as corroborating sources.

Secondary and tertiary sources span later tafsirs, history books and glossaries etc. which were authored in later centuries after the canonization of the Sunni hadith corpus, where the transmission of hadith had effectively come to an end. Such works, as expected, usually lack isnads, and that is because they merely refer to earlier works when citing reports.

A great example of this behavior is the following article on Al-Islam.org. As seen in the prologue, the paper attempts to establish the tawatur (mass-transmission) of a certain report.

However, after brief glimpse of the sources cited, one recognizes the sheer amount of misleading appeals made by the author(s) of the article: 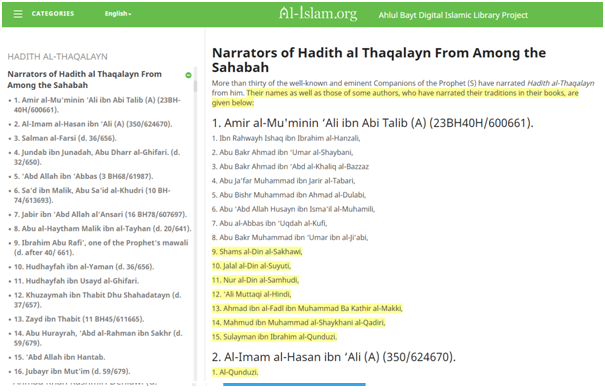 As highlighted above, the author cites the listed sources as works that “narrate” and corroborate this report. However, almost half of the names listed (highlighted) are much later authors who merely authored secondary/tertiary works that quote earlier sources. Thus, it is intellectually dishonest to present their works as sources that “narrate” this report. The presence of the report in such later works has no implications on the hadith’s authenticity.

Scrolling down, one recognizes that a significant chunk of the article consists of similarly listed secondary/tertiary sources that are meshed with other primary sources.

II. The Appeal to Book Titles While Disregarding Isnads

This too, unfortunately, is a similar theme that can be seen in many works authored in this field. In this case, Shi’ite polemicists will often bombard the reader with the names of multiple primary sources where a specific report is mentioned, while disregarding the report’s isnad. Thus, the reader is deluded into thinking that the report is mass-transmitted and independently corroborated. However, the polemicists often hide the fact that all these sources may be all traced back to one isnad/transmitter. Thus, the report would not be independently corroborated, nor would it necessarily be authentic.

A good example of this phenomenon is can be seen in the image below, which displays an article on ShiaPen: 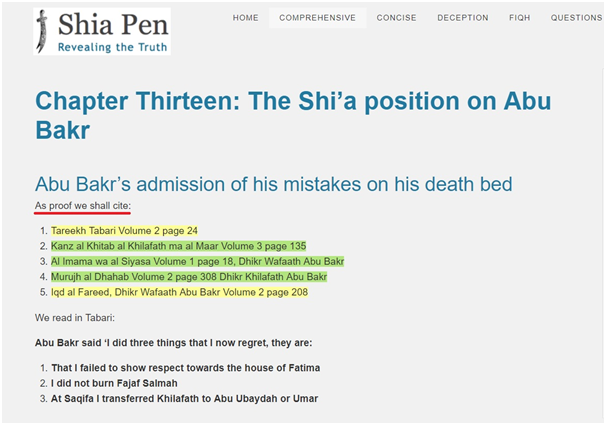 As seen in the image, five sources are cited to substantiate a certain claim made in the article. What the author fails to point out is that only two sources (highlighted yellow) list the report with the same isnad. This isnad also happens to be exclusively transmitted through the extremely weak transmitter, ‘Olwan b. Dawud al-Bajli. The rest of the sources (highlighted green) are secondary & tertiary sources that quote earlier works without listing the chain of transmission. Thus, even though the author presents five different sources, he is actually quoting one report with only one isnad, which is exclusively transmitted through an extremely weak transmitter.

III. The Normalization of a Single Scholar’s Opinion as the Default Sunni Position

This point should hopefully be clear and understandable: not every opinion held by a Sunni scholar is binding upon all Sunnis. In fact, many Sunni scholars across history are known to have held certain exclusive opinions that were deemed irregular and odd (shādh) by the majority of Sunni scholarship. Thus, the individual opinion of a certain scholar, whomever it may be, is not necessarily even relevant to the whole discourse.

This may span individual theological positions, hadith gradings, jurisprudence and many other categories, etc.

IV. The Appeal to Obscure and Unrecognized Authors/Works

Amidst Shi’i polemical circles, many seem infatuated with the notion of substantiating Shi’ite theology from “Sunni works”. This has unfortunately enticed many to desperately ascribe obscure and non-Sunni authors to Sunnism.

There are a variety of authors and books Shi’ite polemicists regularly cite to in this context, such as: Yanabee’ Al-Mawaddah by Al-Qunduzi, Muruj Al-Dhahab by Al-Mas’udi, Sharh Nahj Al-Balagha by Ibn Abi Al-Hadid, Kifayat Al-Talib by Al-Kinji, and many more etc.

The problem with such appeals is that most of the names listed aren’t even accepted as Sunni authorities by Sunni scholarship. For example, Al-Mas’udi, Ibn Abi al-Hadid, and Al-Kinji are declared to be Shias in Sunni biographical dictionaries. On the other hand, the supposed Hanafi author, Al-Qunduzi, is an unknown and unrecognized figure in Sunni circles. In fact, ample evidence exists to suggest that the author was a malicious Shi’ite who attempted to present himself as a Sunni.

In the image below, one can see an example of this phenomenon: 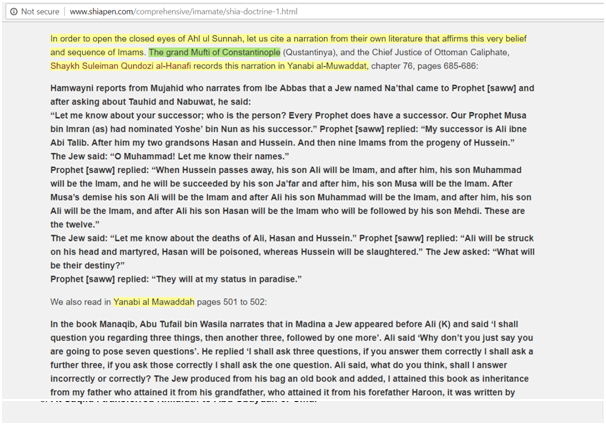 The author of this article on ShiaPen presents Qunduzi’s book, Yanabee’ Al-Mawaddah. as a Sunni source. Ironically, he also unprecedently describes him as the “Grand Mufti of Constantinople” in a desperate attempt to inflate the status of this obscure, unknown and unrecognized author.

This phenomenon is mostly seen in the context of Rijal. Shi’ite polemicists, when presenting a report from Sunni sources, will often attempt to strengthen the status of a specific transmitter of that report by appealing to the individual statements of a few scholars. However, they often end up disregarding the opinions of other scholars in this context, which must all be considered when analyzing the status of a transmitter.

In fact, polemicists will often grasp onto a few individual opinions while dismissing the majority of Sunni scholarship. The image below is a good example of this phenomenon:

The author of this article, which is published on Defending Shiism, attempts to substantiate the reliability of the transmitter, Al-Husain Al-Ashqar. He attempts to do so by merely quoting two Sunni scholars. In the process, he disregards and bypasses the opinions of over seven different scholars who have explicitly criticized him. I have listed their names in my article, where I respond to this polemicist who desperately attempts to authenticate a clearly weak report.

It is quite unfortunate that the discourse today is plagued with such misleading and deceptive appeals. Hopefully, the honest and impartial Sunni and Shi’ite academics and polemicists will acknowledge the importance of academic and intellectual honesty throughout the discourse and abandon this problematic framework.

This is not to say that Sunni polemicists/apologists do not fall into a variety of fallacies when debating Shias, for that certainly is not the case. Perhaps we may address some of those fallacies in a separate article, God willing.

“Chapter Five: The doctrine of Imamate from a Shi’a perspective (Part I).” Shia Pen, Shia