Shia Kalima as a Declaration of Faith

In this article, we will be discussing the Shia Kalima. As all Muslims know, the known and popular Kalima among Muslims is “I bear witness that there is no god except Allah, And Muhammad is the Messenger of God.” (Narrated by Salama bin Al-Akwa’ in Saheeh Al-Bukhari #2484 and Abu Huraira in Saheeh Muslim #27) The Shia Kalima includes the following words “`Ali yun Waliyullah” or “I bear witness that `Ali is the friend of Allah.”

The difference between the Sunni Kalima and the Shia Kalima is that the former can be found in the Qur’an, we find {There is no god except Allah} in Qur’an [Surat Muhammad, verse 19] and we find {Muhammad is the Messenger of God} in Qur’an [Surat-ul-Fath, verse 29].

However, the words “`Ali is God’s friend” are nowhere in the Qur’an. That’s their first flaw with the Shia Kalima. To fix this problem, Shia will take a general verse talking about the obedient believers who establish prayer and give charity [Qur’an 5:55] then claim that the word “believers” is “`Ali”. This is a weak opinion that relies on fabricated narrations none of which are authentic.

Not only is the Shia Kalima not in the Qur’an, but the narrations they use to twist the interpretation of the above verse are all weak and unreliable. This is their second failure and defeat.

Shia Kalima in the Call to Prayer

Now that we are done discussing the testimony of faith, and after we showed that the Sunni testimony of faith (Kalima) or as it is referred to “al-Shahadatayn” is a part of the Qur’an whereas the third testimony added by the Shia Kalima is nowhere in God’s book, we turn our attention to the Islamic call of prayer.

The Shia insist on adding the Shia Kalima to the call to prayer (Adhan) and at the beginning of every prayer (Iqamah). The Shia attack all those who disagree with them and stubbornly alter the common and mass transmitted texts of the Adhan and Iqamah by inserting “`Ali-yun Waliyullah”.

Here is something the Shia of our days may not know, is that their ancestors, as well as the eleven Imams (excluding the fictional one), have never added the words “`Ali-yun Waliyullah” to the Adhan or Iqamah.

First, let’s see what the Imams of the Shia said in their authentic narrations as is found in the main books:

`Ali bin Ibrahim with his chain to aba Ja`far (as) reports: “The Adhan and the Iqamah have 35 parts, he counted by his hand one by one, the Adhan had 18 parts and the Iqamah 17 parts.”

Their leader al-Mufid confirmed this in al-Muqni`ah 1/100 as he also counted 35 parts as opposed to today’s Shia who added to make it 39.

To simplify, if you were to add the third Shia testimony regarding `Ali to the Adhan, it becomes 20 parts instead of 18. This shows al-Baqir never approved of this addition or spoke of it.

It doesn’t stop here, we will notice that according to the Shia standards of Hadith, not ONE authentic Hadith in their books contains the addition of “`Ali-yun Waliyullah” as part of the Adhan. Not one authentic narration says that adding these words to Adhan/Iqamah is obligatory or recommended. This, of course, makes it a “Bid`ah” or innovation, as is confirmed by their top scholars.

[As for adding “`Ali-yun Waliullah” or “Aal-Muhammad Khayr-ul-Bariyyah” and similar things (to the Adhan), then this is an innovation and it’s based on fabricated reports.]

The fact that they are committing a baseless innovation as stated above is their third failure and defeat.

The final nail in the coffin is this quote from one of their biggest and earliest scholars cursing those who make this addition and identifying them as deviant extremists!

Their leader al-Saduq says after mentioning the Adhan: 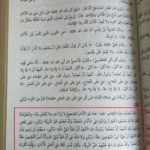 [This is the correct text for the call to prayer, you must not add to it or subtract from it. However, the Mufawwidah (extremist sect of Shia) may God curse them, they fabricated narrations and added to the Adhan these words “Muhammad & his family are the best of creation” they announce it twice and in some narrations after bearing witness that Muhammad is the Messenger of God, they add “I bear witness that `Ali is the friend (Wali) of Allah” also repeating it twice. Others narrated it twice as such “I bear witness that `Ali is the chief of believers truly”. No doubt that `Ali is a friend of God and truly is the chief of believers and that Muhammad’s family is the best of creation. However, these are not to be included in the Adhan and I mention it only so that those accused of extremism and have insulated themselves in our ranks be known.]

This phenomenon is very common in the Shia world, this is how their sect evolved and kept evolving to this day. What was considered at one point “Extremism” for them simply turns into a habit with the passing of time. This is how the early political Shia morphed into a religious sect of extremists.

Their contemporary leader `Abdullah al-Mamaqani says while defending one of their narrators who was accused of “extremism” by the ancient Shia:

[We have clarified more than once, that we do not rely on the ancients when they accuse a man of extremism. Because believing in their smallest virtues (i.e Imam’s virtues) was considered extremism for our early predecessors. Whatever we consider today as being from the necessities of our sect, they (i.e the ancient Shia) used to consider as extremism. A sufficient example would be al-Saduq, he considered those who deny the forgetfulness of the Imams as extremists even though it became from the necessities today. Similarly, establishing for them the ability to know the unseen via Jibril or the Prophet was counted as an extremist belief in their eyes although it is from the necessities of our school today.]

Their last failure shows how the inventions of the extremists and deviants make their way into their core beliefs and shape their sect with time until they end up becoming the norm. This is due to their misguidance and ignorance as well as the leadership of their unqualified scholars under the banner of a non-existing Imam.