Response to: The Significance Of Mourning For Imam Hussain (a.s)

The following is a response to the article on Revisitingthesalaf.org entitled: The Significance Of Mourning For Imam Hussain (a.s) that was published on the 21st of November, 2012, and can be found here.

In this article, RTS quotes narrations with the intention of justifying the exaggerated actions of the Shias during the mourning Majalis that occur annually to commemorate the martyrdom of Al-Hussain at Karbala. In short, RTS quotes various types of narrations that he believes supports such innovations. The narrations quoted fall under a few categories.

Narrated ibn Abbas: ‘I saw the Prophet (saw) in a dream, in the middle of the night, he was disheveled and covered with dust. He (saw) had a container in which he was collecting blood. I said: ‘Oh Allahs (swt) Apostle! What is this?!’ He (saw) replied, ‘This blood of Hussain and his companions. I have been collecting it since the start of the today.’ Ammar said, ‘We noted that day, and we soon found out he was martyred on that very day of (Ashura).’

The Shi’ee Have Preserved The Sunnah Of The Prophet (saw) By Weeping For Imam Hussain (a.s) And Covering Their Heads and Faces With Dust.

RTS goes on to post images of Shias covered in mud to illustrate his point. One doesn’t need to be a linguist in order to differentiate between dust, sand, and mud though, so the comparison is extremely flawed. Furthermore, nothing in the narration implies that the Messenger (pbuh) went out of his way to cover himself in dust; rather, it is simply the condition that he was in.

Furthermore, the narration does not include an order for one to spread dust on themselves, or mourn the death of Al-Hussain, but even if it did, it would still not be evidence for such a practice, since it is only a dream. The Shia grand scholar Al-Khoie said:

Question 1314: If a believer saw the Prophet (pbuh) in a dream or one of the Imams (as) and that they ordered something, would it be obligatory to follow, since it is said that the Shaytan does not appear in their form?

Al-Khoei: Orders in dreams are not considered proof.

RTS also gives evidence that Jinn and the Prophet (pbuh) cried upon hearing of the death of Al-Hussain:

Narrated Aboo Al-Hussain Alee ibn Abdul Rahman Al-Shaybani in Kufa from Ahmad Ibn Hazim Al-Ghafari from Khalid Ibn Mukhlid Al-Qatwani from Abdullah ibn Wahab ibn Zam’a from Umm Al-Salama who said: ‘One night the Messenger of Allah (saw) woke up suddenly from his sleep with fear and anxiety and after a while he slept again, then he woke up with less fear than the first time, then slept and woke up again after a while and in his hand there was red soil which he was smelling and kissing! Then I asked: “What is this soil O Messenger of Apostle of Allah (swt)? He said: “Jibreel (a.s) informed me that Hussain (a.s) will be killed in the soil of Iraq, then I said to Jibreel (a.s) show me the soil of the ground that Hussain (a.s) will be killed in it.’ Then he gave me this soil.

The Messenger (pbuh) crying over the news that Al-Hussain will be killed is established. However, this specific narration mentions that he was kissing the soil that was brought to him by Jibreel. The first flaw with this narration is that it is from the narration of Abdullah bin Wahb bin Zama’a. Abu Ishaaq Al-Huwaini, the contemporary hadith scholar says, “He is Majhool Al-Hal (has an unknown status) and wasn’t called trustworthy by anyone other than Ibn Hibban, ” (Nathl Al-Nibal, 2/770) Secondly, when returning to an 8th century manuscript, the word we find instead of “kissing” is “flipping over”. The letter Laam and the letter Baa have been switched over in the published version which completely changes the meaning of the sentence. See the manuscript below. 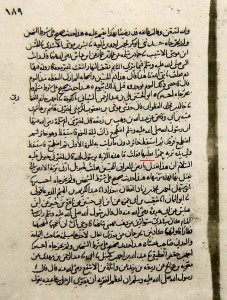 The Dust Of Karbala Is A Cure For Every Disease

The mud/dust found in the city of Karbala has some extraordinary value, in that it is a cure for every illness and a source of Barakah (blessing) and Divine mercy.

Then RTS quotes the following:

I heard Ahmad say: I heard Aboo Bakr say: I heard Al-Khuld (Aboo Ja’far) say: “I had much of a great itch.” He said: “Then I wiped myself with the sand of the grave of Hussain. Then I fell asleep, and I noticed that I had nothing of it anymore.”

Using mud or dirt for the treatment of Al-Jarab scabies is not exclusive to the grave of Al-Hussain. Even mud from Israel is used for the treatment of this sensation. Furthermore, religion is learnt from the Prophet (pbuh), not from fourth century Sufi saints, and thus, his personal experience is not binding upon Ahl Al-Sunnah.

He (saw) and his wives (peace be upon the righteous ones) also held great regard for the red soil of Karbala since it was not some ordinary soil, but soil in which retained a cure for every illness and hence for people to gain great benefit.

Nothing from what RTS has quoted suggests that the Prophet (pbuh) or his wives believed that the soil of Al-Hussain was a cure for every disease, or any disease for that matter. This conclusion is not acceptable.

In conclusion, RTS has only proven a single point, which is that the Prophet (pbuh) cried upon hearing the news of the killing of Al-Hussain, which is a natural reaction really and does not justify any modern day Shia practices. There is no evidence that the Prophet (pbuh) beat himself, wiped himself with the mud, ate it, or used the mud to cure himself when he got sick.