The following article about the Arbaeen was originally written in Arabic by Ahmad Al-Hasani, but was translated for twelvershia.net. Even though our website does not often deal with such topics, however, we have made an exception this time around in order to expose scholars like Mahdi Modarrassi who is either dishonest to his followers, or is too gullible for his turban.

The official governmental resources, the Shia Institutions, and two-faced media and of the Shia Persian Government proclaim and assure that the number of visitors (to Karbala’a) in this year’s Arbaeen anniversary reached seventeen million people! Of course, many ignorant people happily accepted this figure!

Let’s take a deep look on these claims logically.

All statistics agree that the Iraqi population is around 29 million (taking into consideration that one million were killed in military fight from 2003 till now). And when we take into consideration that three million Iraqi are refugees outside Iraq, the real number decreases to 26 million. And when we extract the number of non-Muslims, like Christians, Yazeedis, and Sabians, we reach the number of 25 million Muslim.

Based on this number, there are three categories of Shias who cannot visit karbala’a on the Arbaeen: Young kids, the elderly, and sick people. The international figures state that 38% of Iraqis are under 14 years old; while 3% are above 64 years old. Thus, we can presume that 15% of the Shia Iraqis are under 14 meaning that they will not be able to attend this ceremony. Their number is 2.4 million. The mothers of these children will not visit the city as they have to look after them. Hypothetically speaking, there are two kids under five years old per family, then 1.2 million women were not able to make it. Let’s also assume that 2% (of Iraqis) are from the elderly, which constitute 325,000 people at least. Furthermore, there is the number of sick people in hospitals and houses, and the total number is around 4.5 million Shias who are prevented from attending. In addition, we have to add a number of 750,000 Shias that represents the Shias in different security sectors (i.e the army, police, and other institutions, etc…); this increases the number to 5.25 million. Also,if we add pregnant, menstruating, and confined women, then the number ups to 6 million.

This means that if every adult Shia, capable of walking, goes to Karbala to celebrate the Arbaeen; the number will be 10.5 million. If we then add a number of 300,000 foreign Arab visitors, according to the official Iraqi departments; the total number will be 11 million. Now, where did that extra six million visitors come from?

As for the hotels, the official resources assure that the number of hotels that were able to receive clients is 400 hotels. Hypothetically speaking, the average capacity of each hotel is 100 people; the overall number is 40,000 people. Where did the rest go? 50 schools were opened to receive visitors. Around 500 people in each school, the number is 25,000 people. Let’s also assume that 1000 family received visitors in their own houses; 10 people in each. The number is 10,000 people. The overall number is 75,000 people. Let’s say 100,000 visitors had a residence. Where did the other millions reside?

Regarding the sewage and sanitary drainage, we all know that Karbala was sunk in water the last time it rained, which means that the sewage infrastructure has not been rehabilitated since the toppling of the previous regime. Let’s assume that 17 million people have to urinate three times per day, and that every individual urinates around one liter of fluids. That would mean that there is fifty million liters of fluids that pass by Karbala’s sewage every day. This number is five times more than the amount of water that passed by the sewage during rainy days. Shall we continue and discuss the eight million kilograms of other bodily excrements as well?

Below is some photos of the rubbish & waste “management system” in Karbala. If the city can’t even provide acceptable standard of service for their own residents which is less than 2 millions people, then how on earth can they provide better service to tens of millions more people? This photos are taken from “The Abandoned: The Forgotten Orphans of Karbala” (mins 43:25)

Speaking of the ceremonies of the Arbaeen, visitors have to reside in Karbala in a specific day next to al-Husayn grave may Allah be pleased with him. The engineer Ibrahim al-Zoubaydi provided us with an illustrated map in which he explains, in an intellectual manner, the capacity of the area that surrounds al-Husayn’s grave. We can see, based on this map, that the total area filled by visitors does not exceed 500 thousand m2; let’s presume that each person needs a space of 0.5m to stand, let alone lay down, this mean that this area cannot be filled with more than one million people if we placed people in rows one after the other. Anyway, we already know that Karbala is not a plain land, but that it is settled. This means that this city cannot, in its best conditions, have capacity for more than 500,000 people from the visitors who came from outside Karbala to perform the ceremonies of the Arbaeen visit. Since we haven’t seen any long queues or a large number of crowds in the city’s entry sides because there is no place to stand on near to the grave, nor have we seen a state of confusion and disturbance due to the over-crowdedness, then we can say that the real number of visitors did not reach more than half a million people.

Let’s be more rational please. The entire area of settled Mecca is 88 km2, while the central area that surrounds the Mosque is of 6km2. This area is ten times more the area of Karbala. We all know the crowdedness in Mecca when it welcomes around two million pilgrims in this area though it is equipped with a huge number of hotels and apartment buildings. Now the question is: How can we put 17 million people in an area that constitutes 1/6th the area of Mecca? And here, we are not trying to compare Mecca, this holy city, with any other place on the earth. According to retired and sick minds only, you can put 100 million people per 1 m2…

The research team of twelvershia.net has looked into the booking.com website in order to verify some of the criticisms mentioned by the author of the article and we suggest that readers do the same. We have found that Karbala only has twelve listed properties, while Makkah has 127 listed properties. Furthermore, hotels in Makkah like the Pullman Zamzam have a total of 1315 rooms for guests, while the Hotel Karbala Rayhaan, while seems to be the most popular hotel in Karbala on the website only includes 185 rooms. 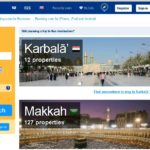 Somebody either needs to be telling the hotel tycoons that they are under-investing in Karbala, or someone should tell the Shia statisticians to stop lying through their teeth.

If it’s still unclear to some of our more stubborn visitors, let’s show them some visual evidence of the gigantic difference between the two locations, hopefully their intellect will be able to process these comparative images.

Two images taken on the same eye-level altitude of 1.5 km.

Makkah hosts a big number of pilgrims annually, it reaches its maximum capacity estimated at about 2 to 5 million visitors both Sunni & Shia, (remember that Makkah has several floors/layers that are all filled). On the other hand, Karbala is supposed to have contained 10 million to 17 million Shia visitors (in Arbaeen) according to Shiite authorities just in one day! How does that make sense when it’s a significantly smaller area!? You judge!

Next, we use advanced software to figure out an accurate number for the areas in question. Below data are taken from area calculator at http://www.mapdevelopers.com/area_finder.php

Thus we find that al-Haram in Makkah which is completely full at Hajj, is about five times bigger than both Shia shrines and whatever is between them. Therefore, if Makkah can reach its full capacity of 2.5 to 3 million during Hajj, how can we believe that the Karbala’ shrines held 20-22 million in the Arbaeen of 2014, 15-18 million in 2013 or 10 million in 2015. They even claimed 12 million visitors to Kadhimiyyah (Musa al-Kadhim’s shrine) in 2015 which is half the area of the 2 shrines in Karbala’!

The following video compares two events, the Jumu`ah prayer in Jakarta in Indonesia, an area which is much bigger than the 2 Shrines in Karbala’, the area is completely full as one can clearly see yet the honest and professional media estimated the number of people to be at 2 million. The video then shows the visitors of the two shrines at Arbaeen, a much smaller area than the square at Jakarta, it’s not even filled with people yet Shia media will claim the visitors are 14 million.

After watching a couple of Drone footage from Iraqi and Shia YT channels on Arbaeen as well as aerial images posted by them online, the TS team estimates that the true number of Shia visitors to Karbala’ on Arbaeen is less than 1 million. Most likely, they number around 300,000 to 500,000 and God knows the true number. So when you read on Shia propaganda outlets like “The Shia Post” titles like these “Number of Arbaeen pilgrims in Iraq exceeds 26 Million” Then know O dear reader that these folks are shameless liars who live in delusions.

After cornering the Shia with clear evidence, they shifted their arguments and began to say:

A- No, we don’t mean that 20 million people were gathered in Arbaeen at once. Rather, it is during the period of all 40 days.

We respond: In that case you’re dividing the alleged 20 million by a 40 days and thus we’re ending up with around 500,000 people in the city at one time. Hardly, the “largest gathering in the world” as you exaggerators claim.

B- No, the 20 million were not all in the city at once. Rather, most of them were on the road between Najaf and Karbala’.

We respond: Similar to the above, this means the people were not gathered in the city. Thus by default your claim of “largest gathering in the world” is refuted. However, we will go a step beyond as always and calculate the numbers for you to show you that this lie is a mathematical impossibility.

Below are images of the Najaf-Karbala’ entrances and the Karbala’-Najaf entrance on the day of Arbaeen: 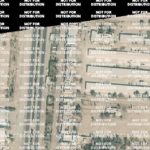 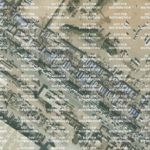 Najaf to Karbala’ is a 75 km long road, this road is about 10 m long in its width, giving a total area of 750.000 m2. If we take a crowd density of 1 person per m2 (which is too generous), it produces 0.75 million people. Let’s also factor in the road from Baghdad, which is 100 km to Karbala’ thus giving another million. Add the road from Hilla to it too, which gives another 50 km and an additional half a million people, you still get only a total of 2.25 million people.

Additionally, if we take the area of two shrines and whatever is between, that area is about 85,000 m2. Regarding crowd densities, it is PHYSICALLY IMPOSSIBLE to get a crowd density of over 9 people per square meter, which is what you see sometimes in Japan when they squeeze people into a full train. So if we remove the two shrines and all the trees and obstacles then level everything and pack the people on those two squares and between you would end up with another 0.75 million people. Unless these shrines have ten floors (they don’t) you could physically speaking never even reach a million on the gathering place itself.

Keep in mind, Karbala has less than ten entrances to the city. That means that if you want to accommodate an influx of 23 million people on a day, then assuming ten entrances, through EACH ENTRANCE would have to pass more than 25 people EVERY SINGLE SECOND for the ENTIRE 24 HOURS of that day!!

May God further expose the extremists and exaggerator.