The following is a response to SlaveOfAhlubait’s “Ayesha and her ability to understand quran”. The article can be found on his blog and on the Wilayat website.

The narration is as follows:

“ayesha says that once she asked holy prophet asws about the verse {[Shakir] And those who give what they give (in alms) while their hearts are full of fear that to their Lord they must return (mominoon/60),} ; she said o prophet asws! does this verse speak of one who steals, does zina and drinks wine? upon this holy prophet said: no, it speaks of one who offers prayers, fasts, and gives charity and he is having fear of allah”

The terms “Yu’toon ma Aatoo” can hold various meanings. It can mean “those that commit what they have committed” or “those that give what they give” or “those that enter forth where they have entered”. Due to this, the understanding of the words can suggest a positive or a negative connotation, and in this case, A’isha assumed that it was a negative connotation, since the verse continues that those that do this have fear within their hearts. In other words, a mistake in understanding this narration is only human, which is why A’isha was keen to ask the Prophet – peace be upon him – about the meaning, since she had doubts about her own understanding.

More importantly, we find that SlaveOfAhlubait is filled with so much hatred for Abu Bakr that he could not translate the narration correctly. The narration includes the Prophet – peace be upon him – saying to A’isha, “No, O’ daughter of Al-Sideeq.” However, SlaveOfAhlubait’s fingers would not move upon the keyboard to include this.

Refer to the image below: 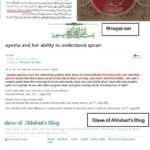 This section contains everything and anything in the website that revolves around the beloved wife of the Prophet – peace be upon him – A’isha bint Abi Bakr.   A’isha’s Jealousy and Surat Al-Tahreem Did A’isha and Other Sahaba Make [read more]

Response to: Aisha prayed in the way that is against the Sharia Law

The following is a response to ShiaSunni.info’s article “Aisha prayed in the way that is against the Sharia Law.” The article was published on the 26th of March, 2013, and can be found here. ShiaSunni.info explain: We know that if [read more]

Response to: The Oppression Of Sayeda Faatima (s.a) I

The following is a response to the article on RevisitingtheSalaf entitled: The Oppression of Sayeda Faatima (s.a) I, which was published on the 21st of August, 2012, which can be found here. RTS starts off with the following introduction: In this article [read more]