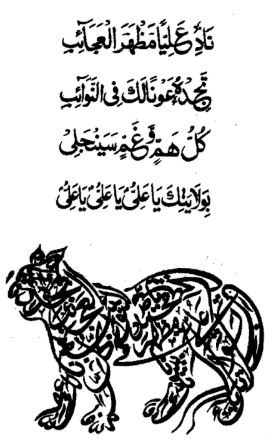 “Nad-e-Ali” is a famous supplication that is popular among certain Twelver communities today. To the average Muslim, the duaa is a clear and apparent manifestation of ghuluww (extremism) in the status of ‘Ali b. Abi Taleb, which has unfortunately been normalized in Twelver theology. Similarly, it is an example of how shirk had been appropriated in the name of Twelver Shi’ism.

The duaa is as follows:

Call upon ‘Ali, the manifester of wonders

You shall surely find him an aid during your difficulties

Every sorrow and distress shall disappear

Ironically, this famous supplication is not even authentic according to Twelver hadith standards. The author of the first Shi’ite source to ever allude to this supplication died in 1111 AH, a whopping 1000+ years after the death of the Prophet. The book is no other than Bihar Al-Anwar by Al-Majlisi. What is further damning is that the late Majlisi did not even list an isnad for this supposed supplication, so it is a baseless report according to Shi’ite standards, let alone Sunni standards.

What did Al-Majlisi say as he listed this supplication in his compilation?

Al-Majlisi simply commented saying: “It is said that Messenger of Allah was told on that day [Badr]: ….” and he proceeded to list the duaa known as Nad-e-Ali (Majlisi 20:73).

Even the Shi’ite editor of Bihar Al-Anwar, Ali Akbar Ghifari, made note of the report’s bizarre wording. In the footnotes, he said:

The last sentence [in the report] is weird, and it does not fit with the previous sentence. It seems as though it is an addition by some ignorant folk or the misguided Sufis who claim that such statements are supplications. Thus, they mention them as dhikr and repeatable prayers. Some of them even believe that repeating these statements has a virtue that is not even found in Salah! May Allah protect us from innovations and followers of their desires. (Majlisi 20:73)

One may find himself asking, “What is the source of this baseless fabrication?”

The Afghan Sunni theologian, Mulla ‘Ali Qari (d. 1014) was the first individual to ever cite this alleged supplication. In his collection of fabricated reports, Al-Asrar Al-Marfu’ah fi Al-Ahadith Al-Mawdu’ah, he said: “Another appalling fabrication of the Shia is the hadith: call upon ‘Ali the manifestor of wonders….” (Qari 385). One hundred years later, the report “magically” appears in the Shi’ite collection, Bihar Al-Anwar, without an isnad with a 1000+ year-long gap in its transmission.

What is noteworthy is that Mulla ‘Ali Qari and Al-Majlisi came from the same era, and they both came from proximate Farsi-speaking regions. Thus, it is evident that this report was first circulated in Khorasan and surrounding Farsi-speaking provinces by the tenth/eleventh century, which unsurprisingly coincides with the rise of the Twelver Safavids in Persia. Hence, the report is exclusively found in collections from that era.

Twelver prayer books today contain various renditions of this fabricated supplication, with some spanning multiple pages. This website provides an example of a distorted redaction of this hadith that is recited by the Shia today.

Those who opt to base their faith on 11th century Shi’ite Safavid fabrications from Persia will cling on to this report (and similar fabrications), but those who follow Allah’s commands will remember his words:

When my servants ask you about Me, tell them that I am very close. I answer the prayer of the supplicant when he calls Me; therefore, they should respond to Me and put their trust in Me, so that they may be rightly guided. [Quran 2:186]

And Allah is the Witness of Abu Al-Abbas.