On Jonathan Brown’s Accusation against Mu’awiyah

The following is a brief response to Jonathan Brown’s accusations against Mu’awiyah from his “Misquoting Muhammad”. Unlike most of our refutations, this article refutes an accusation made by a Sunni, Dr. Jonathan Brown, may Allah guide him, for his statement has started making its rounds in Shia circles, and thus, a response is necessary.

“Mu’awiyah himself encouraged his followers to forge Hadiths detracting from the standing of his opponents, the Shiah supporters of Ali and his descendants.”

The first issue is the attribution of the narration to Al-Mada’ini. Al-Miswari, who is an extreme Shi’ee, quotes this narration, then mentions Ibn Abi Al-Hadeed’s quoting of a narration by Niftawayh. Ibn Abi Al-Hadeed, who passes away in the seventh century, does not even hold the view that Mu’awiyah is a Muslim, and states that he is accused of zandaqa. Refer to his commentary on the 25th speech for a demonstration of his hatred for Mu’awiyah and accuses his mother of debauchery.

It should also be noted that we are not aware of any book by Al-Mada’ini called “Al-Ahdaath”. The lengthiest lists of his works have been compiled by Ibn Al-Nadeem, in his Fihrist, and Yaqut Al-Hamawi, in his Mu’jam, and neither contain a book named “Al-Ahdaath.” We do find the names of books that fall under the category of “Al-Ahdaath”, yes, but there is a difference between a category and the title of a book.

More importantly, even if we accepted that Al-Mada’ini did write this, we cannot accept the reliability of the report since Al-Mada’ini, who passed away in the third century (225 AH), does not include a chain of transmission.

Dr. Brown has published some posts in where he has clarified his position in regards to the narration. As we can see below, he does not endorse the narration of Al-Mada’ini. 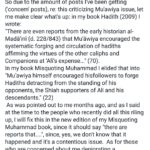 Response to: The Banu Umayah were Cursed and Hated by the Holy Prophet (s)

The following is a response to ShiaPen’s article entitled: The Banu Umayah were Cursed and Hated by the Holy Prophet (s), which can be found here. In this article, ShiaPen quotes a few narrations that suggest the bad treatment of [read more]

Muawiyah’s Limitations on the Narration of Hadiths

Al-Shihristani suggests in his “The Prohibition of Recording Hadith” (p. 217-218) that Muawiyah has extended the limitations that were set by Omar in his reign. Like Uthman though, there are no evidences that he ever issued a ban on the [read more]

Response to: Any Sahih Hadeeth about Glory of Mawia?

The following is a response to SlaveOfAhlubait’s article entitled: “Any Sahih Hadeeth about Glory of Mawia?” The article can be found here. In this article, SoA demonstrates the objectivity of the scholars of Ahl Al-Sunnah. Of course, this was not [read more]